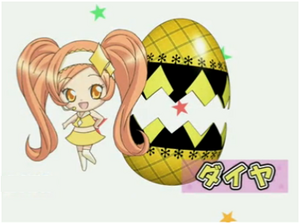 Dia (ダイヤ, Daiya) (Known as Diamond in the English version of Shugo Chara!) is Amu Hinamori's fourth and final Guardian Character. She represents the radiance that emits from Amu's heart and her desire to be an idol like Utau. Her fellow Guardian Characters are: Ran, Miki, and Su.

Unlike most Guardian Characters, Dia is among the most powerful and only uses her powers in the most necessary situations.

While Dia is an X-Character, her hair is golden yellow. She wears it swept back with an orangish headband with a black diamond crest that is covered by an X-mark. She wears a 60's style dark purple and grey dress with a white collar and has purple slippers and gloves. There are three yellow diamond buttons on her dress. Her eyes are a hollow yellowish gray. Her skin is a tan tangerine color.

Normal Dia has orange hair, arranged into long pigtails like Utau, and a white headband with two yellow diamond crests. Her blouse is yellow, with a white collar and one white diamond at the middle of the shirt.A small portion of her stomach is also seen. She also wears a yellow skirt and white boots. Her skin color is peachy and she has golden yellow eyes.

Amu's diamond egg became an X-egg when she struggled figuring who she really was. The X-Diamond egg wound up in the collection of X-Eggs from Utau's concert. Later on, Utau confronted Amu with the X-Diamond egg, and it hatched into X-Dia. Then, Utau Character Transformed with X-Dia into "Dark Jewel", and at the same time, Amu transformed with El into "Amulet Angel". Just when Utau was about to finish off Amu, both Character Transformations reverted due to the exhaustion of energy.

In the final battle between Utau and Amu, Amu told X-Dia that she has many flaws in her life. However, she also realized that was part of who she was, and that she can shine if she believes in herself and believes that she can make use of her flaws to improve her light. X-Dia then resumed her true form, went back to Amu, and they Character Transformed into "Amulet Diamond".

In her real form, she is still enigmatic and calm, but happy like an idol and wise. Her inner character seems to be different in the anime and manga. In the latest Shugo Chara! Chapter, it is hinted that Dia's character might be one like Su - somewhat "airheaded" - but in the anime, she expresses herself to be mature, but romantic and sassy on the inside.

In the Manga, Dia appears to be slightly spoiled and seems to want everything to shine so she can add decorations to make things shiny. She also has a more leveled body (her head is more in proportion to her body size) but she still remains chibi.

The Shugo Chara! Encyclopedia! describes Dia as a girl who's "always there when they need her the most". Throughout the series, Dia is believed to be one of the most special and powerful Guardian Characters. Dia sees great radiance in people and loves the things that make them shine.

When first appearing in the Manga and Anime, Dia was born as an X-Character known as X-Dia. She only saw flaws in people and never accepts a person without radiance. She expected Amu to never regain her radiance as she believed she would never shine with her flaws. Upon realizing that a girl with flaws will shine as well, she was touched, lifting her X mark.

When Utau Character Changes with X-Dia, she becomes able to hypnotize people in a wider range and draw out their heart's eggs, but also turn them into X-Eggs. The songs recorded during their Character Change are downloaded into a CD made of X-Eggs, which draws out the listener's heart's egg and turns it into an X-Egg.

During this Character Change, Utau's headbands are replaced by a pair of golden diamonds. While under the change, Utau's personality remains the same, but her singing voice is magically enhanced.

When Amu Character Changes with Dia, she changes into a positive character with a shiny smile and releases the light emitting from deep inside her heart, and she becomes more calm. During this Character Change, Amu's hairclip will change into a yellow diamond. This Character Change only occurred in the anime, episode 110.

It should be noted that in the original manga series, Dia's Character Change was not shown. Therefore it is still unknown how it would change Amu's personality if it did happen.

With X-Dia, she can Character Transform with Utau to become the dark idol: "Dark Jewel". This transformation first appears in episode 29. Because Utau is not her owner, the transformation ends very fast and drains a lot more energy than usual.

Utau wears a headband with diamonds attached to both sides of her ponytails, black fishnet stockings, boots, purple gloves, and a dark blue leather tank top with a diamond cut out of the back.

Their special attacks are Shining Black, which can send out a burst of black diamonds to attack the target; and Glitter Particle, which triggers a powerful blast to defeat the enemy and undo Character Transformations.

Of all four Character Transformations, this is used only as a last resort, and is known as Amu's second most powerful form.

In this form, Amu wears a pair of ponytails and a yellow hairband with a futuristic headphone and a pair of double diamonds attached it. Her outfit is a futuristic white idol skirt. A white ribbon is attached to the back of her neck with straps that go down to her waist. She wears white, thigh-high boots with yellow heels.

Amulet Diamond's special attack is "Starlight Navigation", which is used by a small golden globe. She later uses two attacks in Chapter 38: "Twinkle Shield", a defense maneuver and "Shooting Star Shower", a warming shower of stars. While in this Character Transformation, her powers include the ability to fly. The headset she wears allows her to hear whispers of the future while traveling in the Road of Stars. In Episode 24 of Shugo Chara Party!, she attempted to use a new attack called "Twinkle Hold", a binding manuever. Like Amu's other transformations, she can perform "Open Heart". When she combines powers with Pure Feeling, the Open Heart magnifies to a stronger level and can purify broken X-Eggs out of range.

Amulet Fortune is the only Character Transformation that uses 4 guardian characters. This is a special tranformation of Hinamori Amu, that cannot be maintained for a long period. It can be only seen in episode 100 & 101, and is Amu's most powerful Chara Transformation.

As Amulet Fortune, Amu wears a white bridal gown tied by a pair of yellow ribbons on her dress and a veil with a large jewelry headress with four diamonds. She has a colorful ribbon tied around her chest and wears a set of white shoes that comes with white stocks tied. She wears a pair of long white gloves.

Her only ability so far is a much more powerful Open Heart. She calls it "Open Heart Full Volume". 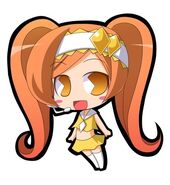 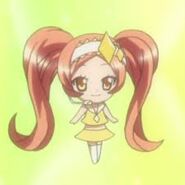 Retrieved from "https://shugochara.fandom.com/wiki/Dia?oldid=33420"
Community content is available under CC-BY-SA unless otherwise noted.