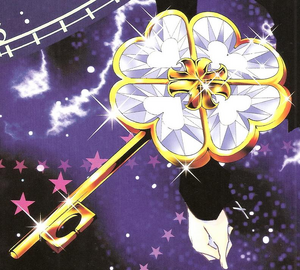 The Dumpty Key is a golden key with a similar style to the Humpty Lock. Though the lock and the key do not seem to fit at the moment, the key can sense something when the lock utilizes its power. It belonged to the Hotori family, but it got stolen by Ikuto right before Amu received the Humpty Lock. The Dumpty Key originally belonged to Aruto Tsukiyomi.

The Dumpty Key's real ability is said to unlock people's hearts so that they might understand each other's feelings and put their doubts aside. Since its companion is the Humpty Lock, their powers are very similar. Like Humpty Lock, it has the power to grant people the ability to Character Transform, which Ikuto uses to Character Transform into Black Lynx. In chapter 38 and episode 100, Amu puts the key into her Humpty Lock, and so is brought to the Road of Stars to see Ikuto's painful past. After she finally understood how he felt, she opened her heart to him, allowing the Dumpty Key and the Humpty Lock to turn them into Amulet Fortune and Seven Seas Treasure.

It is shown that Tadase's father was a friend with Ikuto's father, Aruto Tsukiyomi. However, Aruto went missing and only his violin was found. Tadase's father is seen worrying for Aruto and Souko Hoshina, Utau and Ikuto's mother. Tadase's father gives Tadase the Dumpty Key and warns him to never lose it. Few years later, Tadase finds his dog Betty lying on the floor and seeing Ikuto taking the Dumpty Key from him. Ikuto said to him that he was taking back what was really his. In chapter 43, it is shown that the Dumpty Key is actually a symbol of Yui and Aruto's friendship. In chapter 45, it further reveals that its original owner was Aruto Tsukiyomi.

Dumpty Key first introduced in the anime.
Add a photo to this gallery

Retrieved from "https://shugochara.fandom.com/wiki/Dumpty_Key?oldid=32696"
Community content is available under CC-BY-SA unless otherwise noted.