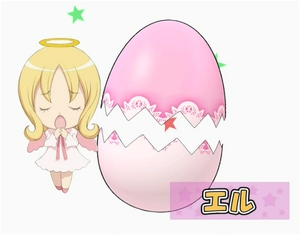 El (エル) is Utau Hoshina's second Guardian Character. Her name is pronounced "Eru". She is a complete opposite character of her devilish partner; Il. She is born from Utau's desire to make other people happy by singing. Her name is based off of the English title of "'Angel". Her egg has a light pink lace pattern on the bottom half, while the top half is just pink.

Utau ignored El, so she left home and found herself in Amu's care until Utau finally decided to come together with Amu and El returned to her. Though she did not like Amu or any of her friends at first,due to their hostility towards Utau, she eventually learns to be friends with them, often hanging out with their Guardian Characters and helping Amu trap X-Eggs. She tends to write things down in a journal, and despite being Utau's Guardian Character, she is not a very good singer herself.She's a very caring guardian character.

El has golden hair with a little curl at the bottom. She wears a white angel dress with a long pink ribbon, and has a pair of pink angel wings. Above her head is a golden halo, which is a love radar and can be taken off. Her eyes always look closed and the slants change depending on her feelings. Ran first noticed El and believed that she was still sleeping. Even though El was awake, her eyes looked closed.

El is a kindhearted and gentle character. She dislikes fighting and competing against other people, and because of that, Utau thought of her as weak-willed and kept ignoring her, thinking she was useless. El can act over the top at times, declaring herself an angel of love if she sees a situation regarding the subject. El apparently likes pop music, or any music that brings good feelings. She is also a music critic, as to listening to songs, and those who sing one of Utau's songs. The Shugo Chara! Encyclopedia! describes El as "kind, and does everything her own way", but has a "slight tendency to get preachy".

El can perform Character Transformation with Amu without her permission. She can also sense X-Eggs like any other Guardian Character and can use limited telekinesis.

When El Character Transforms with Amu, they become "Amulet Angel". This ability was first triggered when Amu described what a guardian Character represented and felt pity for El for having been abandoned by Utau. She can perform this transformation without Amu's consent. 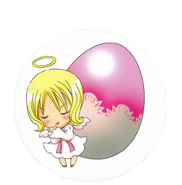 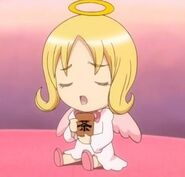 El is crying while Il Teasing her...

El and Il doing Doki
Add a photo to this gallery

Retrieved from "https://shugochara.fandom.com/wiki/El?oldid=33426"
Community content is available under CC-BY-SA unless otherwise noted.