You may be looking for the artbook The Heart's Egg...

As the child becomes an adult, the egg will disappear without a trace. However, it can be assumed that if the child stays attached to his or her hopes and dreams, the egg will stay even through adulthood.It's revealed at the end of the manga that the Heart's Egg is actually the Embryo.

Ran's egg is red with a plaid pattern. A black stripe aligned with hearts on the edges cover the center of the egg, and in the stripe are red hearts.

Miki's egg is blue with a plaid pattern. A black stripe aligned with circles on the edges cover the center of the egg, and in the stripe are blue spades.

Su's egg is green with a plaid pattern. A black stripe aligned with crosses on the edges cover the center of the egg, and in the stripe are green clubs/clovers.

Dia's egg is yellow with a plaid pattern. A black stripe aligned with flowers on the edges cover the center of the egg, and in the stripe are yellow diamonds.

Il's egg is purple on one half of the egg, black on the other. A black, Gothic lace pattern adorns the center of the egg.

El's egg is pink on one half of the egg, light pink on the other. A light pink lace pattern adorns the center of the egg.

Yoru's egg is black with a white zigzag stripe across the center of the egg. In the stripe are cat's paw imprints.

Kiseki's egg is baby blue with a yellow crown and two swervy, yellow lines going across from the crown.

Temari's egg is light pink with pink flowers on the egg.

Rhythm's egg is dark blue with blue flowers on the egg.

Daichi's egg is blue with an orange circle on the bottom and a yellow star in the circle.

Pepe's egg is pink with a magenta, cloud-like stripe going across the center of the egg. In the stripe are cream rabbit head imprints.

KusuKusu's egg is checkered with red and white diamonds. A mauve stripe goes across the egg, and there is a mint green star and two light blue teardrops in the stripe.

Musashi's egg is light green with a bamboo stick imprint in the center of the egg.

Nana's egg is mauve with a multicolor flower brooch in the center of the egg.

Hotaru's egg is yellow with an orange sun in the center.

X-Eggs are known to say muri which means impossible or useless.

Should the child with the Heart's Egg become burdened by worries and doubts, the Heart's Egg will slowly become tainted black. If the child gives up his or her dreams instead of pursuing them, it will eventually become evil and mischievous X-Egg and attack everyone in sight when it hatches into an X-Character.

Some X-Eggs however are quite friendly such as the ones that stayed at Rikka's apartment building. They cared about Rikka and explained "how they had a lot of fun with her" after they were purified by Pure Feeling and Amulet Diamond.

X-Eggs can also build up a lot of stress and eventually self destruct due to its extreme negative emotions. Not only that, but when enough X-eggs are around in an area, they can perform formations that can be quite challenging to win against them, or they can combine powers to create a "bigger X-Egg" and hatch to become a "Mega X-Character" which can be EXTREMELY dangerous.

Only Amu Hinamori, Utau Hoshina, and Rikka Hiiragi have been able to purify the X-Eggs, along with an attack Yamato Maihime and Clown Drop can use together called 'Queen's Waltz'. Platinum Royale and Amulet Heart can also use 'Platinum Heart' to do the same.

In the second season of the anime, the new antagonist Lulu can use a ruby necklace and Character Change to corrupt her target and turn her egg into a Wishing Egg, also known as "?-Egg" or "Wishing Egg", a ruby-colored egg with a question mark on it.

Once it turns into a Wishing Egg, it takes control over the owner and wreaks havoc while in a Confusion Character Change. If the victim gets provoked, he or she will be able to Character Transform. 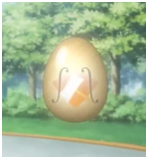 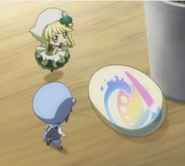 Retrieved from "https://shugochara.fandom.com/wiki/Heart%27s_Egg?oldid=34118"
Community content is available under CC-BY-SA unless otherwise noted.