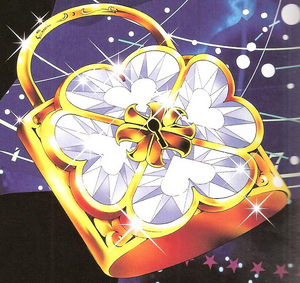 The Humpty Lock is Amu Hinamori's main artifact that bestows upon her (and later the others) the ability of Character Transformation (also known in Japanese as "Chara Nari") without the Humpty Lock, Amu is not able to Character Transform. It was left behind by the Founding King of the Guardians, who wrote in his handbook, that it is to be saved for the one person with three Guardian Characters. Besides the Humpty Lock itself, there is also a key called the Dumpty Key. The Dumpty Key is currently with Ikuto.

Other than serving as the main item to perform Character Transformation, Amu can also use it to perform the final move "Open Heart" to cleanse X-Characters, X-Eggs, or Mystery Eggs (anime exclusive only) while in the form of either Amulet Heart, Amulet Spade, or Amulet Clover. Though its true potential is yet to be shown, it has been seen producing an enormous power upon different things, such as performing Character Transformations for others, giving Amu a power up, and disrupting another's magical capability. In Chapter 36 and 37 of the manga, the Humpty Lock and Dumpty Key have finally made contact of each other by Amu, thus resulting for her and Tadase to see Ikuto's memories when he was still a child. In Episode 100 in the anime version, there was a more detailed aspect of what was going on behind Ikuto's memories. After Amu transforms into Amulet Diamond and finally comes face to face with Ikuto, the Lock and Key have reacted again to cause them to special transform into Amulet Fortune and Seven Seas Treasure.

Humpty Lock introduced in the anime.

Retrieved from "https://shugochara.fandom.com/wiki/Humpty_Lock?oldid=32697"
Community content is available under CC-BY-SA unless otherwise noted.