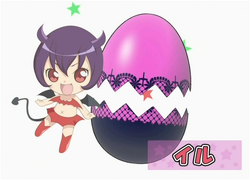 ll (イル, Iru; ; ; ) is Utau Hoshina's first Guardian Character. Her fellow Guardian Character is El, whom she likes to taunt. Her name is based off of the English title of "Devil".She is born from Utau's desire to be a rock star and attract an audience. Her egg is lace patterned, the lace itself being black while the rest magenta.

After El left home and Utau became more attached to X-Dia instead of her, she began to feel lonely. Il joined forces with Amu because Utau found her useless compared to X-Dia. Later on, though, she returned to Utau's side after realizing what she could do to pursue her dreams.

Il has a devil-like appearance. She has dark-purplish hair with horns, a red, batwing shape covering her top part and her bottom. She has a black, devil's tail, and she wears red boots. She also has black bat wings.

The devilish Il is a rather wild and mischievous character. She hates it when things are peaceful and orderly because she gets bored during these situations. Il also tends to be rude to people, specifically Yukari Sanjo and El. She also likes rock music. At times, she is serious when dealing with the X-Eggs and the Mystery Eggs. The Shugo Chara! Encyclopedia! describes Il as a person who "loves to tease" but "hates being preached at".

Like El, ll can Character Transform with Amu without her permission, as well as sense the presence of other Guardian Characters, X-Eggs, X-Characters, and Mystery Eggs.

During Character Change, Utau gains a pair of bat wings and is able to pull out Heart's Eggs from the audience and turns them into X-Eggs.

In Chapter 43 of the manga, Amu is seen performing Character Change with a Guardian Character other than one of her own. When she Character Changes with Il, she gets a pair of black bat wings, granting her the ability to fly.

Outfit: Utau wears a red dress that puffs out at the bottom like an umbrella. It has small black stripes running down it, and at the end of it are crosses, and has bat wings on her back. Utau also has bat wings in her hair, and large red boots.

Abilities: Her main attack is "Nightmare Lorelai", an attack that sends out a hurricane of butterflies (manga)/bats (anime), and can also use "Nightmare Trident" as her primary weapon.

Outfit: Amu wears an outfit similar to Il's, with a red bat wing bikini. She wears striped socks and black boots. She also wears a black hat with devil wings on them.

Retrieved from "https://shugochara.fandom.com/wiki/Il?oldid=33421"
Community content is available under CC-BY-SA unless otherwise noted.