Kukai Souma (相馬空海 Sōma Kukai), is the upbeat and energetic former "Jack's Chair" of the Guardians. He participated in their activities and missions until he graduated, though he kept in touch and continued to be of assistance whenever possible. Kukai is the third Guardian, after Amu and Rima, to gain the power of Character Transformation.

Kukai is the big brother to the guardians and one year senior to most of them. Kukai helps Amu with her training as the Joker. Although he was the captain of the soccer club, Kukai loves and excels at all sports. At the end of the school year, Kukai graduates and goes on to middle school. However, Kukai returns to visit the Guardians now and then to assist them. Kukai is very good at being able to tell if something is wrong with a friend such as when Amu, Tadase, and Nagihiko were having problems. He is able to make people open up when they are worried or sad.

During his time in Seiyo Academy, he is close friends with Tadase Hotori and carries the responsibility of training Amu.

As a sporty kid, he has an outgoing personality, and also has a sense of justice. He is very competitive and sometimes competes with Amu and Nadeshiko. He is very into sports, and one time, when he begins experiencing romantic feelings, and El says that it's his first love, Daichi comments that it's because he hasn't ever focused on anything besides sports before, and that he's actually surprised with this.

Kukai is also possibly superstitious, since he has been seen giving Utau "good luck charms," by slightly punching her forehead.

He would visit the Guardians sometimes and help out in battle. His special attack is "Golden Victory Shoot," and he taught Amu it but however, turns out to be a disaster.

Kukai has light brown hair and emerald green eyes. He also has pierced both ears.

He is usually in his school uniform (with Royal Cape), but will occasionally wear other outfits.

During Character Change, Kukai receives a star-shaped hairclip and becomes more athletic. He can use all kinds of sports items, as long as it keeps him going.

He also receives a skateboard or a snowboard; depending on the terrain he is on.

Thanks to the Humpty Lock, Kukai and Daichi are able to perform a Character Transformation during the beginning of spring term, becoming "Sky Jack" ( スカイジャック ) . This represents his desire to play many sports.

Kukai first becomes "Sky Jack" in Episode 29 of the anime and chapter 18 of the manga.

Appearance:
As Sky Jack, he wears the green outfit of a pilot with pilot goggles with a star on his left of the pilot headband. He also wears black boots.

Abilities:
Sky Jack's special attack is "Golden Victory Shoot" ( ゴールデンビクトリーシュート) , using a fiery golden soccer ball to take down his target. He is also highly energetic and athletic, much like his Character change state and Amulet Heart.

Sky Jack rides on a snowboard that gives him flying qualities.

Trivia: In the manga, Kukai has transformed into Sky Jack once and never demonstrated any of his new powers.

Kukai has a grandfather living in a temple on the mountains (the climate setting differs in the anime and manga). In a much later time, he is revealed to have four older brothers, named Kaidou, Shuusui, Unkai and Rento. Kaidou is always pushy and harsh to him, but that turns out to be their way of communicating and playing. They also have been known to pry into Kukai's personal business, for instance, when they saw he had been texting someone a lot, they assumed it was his girlfriend, and so they harassed him and stole his phone to see who the girl was, though they were rather shocked when they found out who he had been texting. 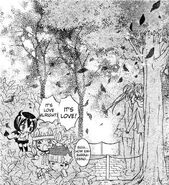 Utau admits that she no longer likes Ikuto

with Female clothes
Add a photo to this gallery

Retrieved from "https://shugochara.fandom.com/wiki/Kukai_Souma?oldid=33647"
Community content is available under CC-BY-SA unless otherwise noted.