Lulu wears a purple hair clip, has light sky-blue eyes, and has curly, olive-yellow hair. It may appear to look blonde or green. Lulu also wears a sky bule dress with a corset, with sleeves that are folded up with buttons, she wears matching heels.

Lulu comes off as a cold person, but when it's for the Embryo egg, she becomes very restless. Sometimes also often uneasy when she becomes nervous. She even sometimes annoys Amu with her attitude.

But in reality, Lulu is a nice person who helps her mom, and tries to get the Embryo in order to restore her former radiance as an actress again.

This is Lulu's guardian character. Nana represents her carefree side, a personality that she often hid due to her extravagant upbringing. She encourages Lulu to try many things and not worry about other people's expectations.

During character change, a flower appears on Lulu's hair clip and she develops an outspoken personality who speaks with many slang words. She is also gains the power to use her necklace to corrupt Heart's Eggs.

During the final battle with Amu and her friends, Lulu used her necklace's power to corrupt Nana into a ?-Egg that character transformed with her into Dream Dream. After they are purified, she remained inside her egg but not long after Lulu regretted putting her own wishes above her guardian character's safety.

Lulu can turn Heart's Eggs into ? Eggs using a ruby necklace which she crafts herself. Lulu can also corrupt the owners by forcing the egg to Character Transformation with them. The necklace hypnotizes a child and corrupts their Heart's Egg, which transforms it into a ? Egg.

When she Character Changes with Nana, her barrette becomes a large lavender flower pin, and she is able to hypnotize people into using a handcrafted ruby necklace and corrupt their Heart's Eggs by turning them into ? Eggs, using her catchphrase "If there's something you wanna do, then do it to your heart's content!!"

Lulu uses the necklace and her Character Change to encourage a target to do something they are normally too insecure to do in their normal state.

The ruby necklace then enables them to Character Change and Character Transformation while in a corrupted state.

During her final battle with Amu and the Guardians, Lulu asked Nana to forgive her, and used the Ruby Necklace on herself. Eventually, Lulu underwent a Enigma Character Transformation, becoming "Dream Dream".

The form granted her many abilities and almost led the Guardians' defeat. Then Amu told her she was doing nothing more than forcing her dreams on others, because she doesn't know what her dream is, but also encourages her to find it. This form is removed after Amu used Open Heart to purify her.

In this form, Lulu can make rubies materialize through willpower and use them to attack her opponents with her Giant wishing egg. She later shot a strong wave of scarlet energy to attack Amu. 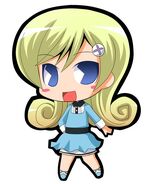