Start a Wiki
Manami is a minor character, who goes in the same class as Amu Hinamori. She is one of the few characters who are closer to Amu aside from the Guardians. In the first episode, when Amu confessed to Tadase, she was one of the first people to confront her. The two have been close friends ever since. Because her mother owns a flower shop, Manami dreams of becoming a florist, but also wants to try other stuff.

Manami's appearance is a peach-skinned girl with brown eyes. She have brown hair that are merged into a pair of ondangos, but small stems are poking.

As Flower Dream, Manami's appearance resembles of a flower or "flora". Manami's hair color merges into a salmon or pink color, and her ondangos are being connected to large flowers that have a deep pink color. Her attire is a wild flower-themed top and a white-pink pattern on her skirt. She wears a pair of green, elbow-length gloves, and the leaves are connected to her arms and skirt. On her legs, she have bushy-themed thigh high boots with the same color as her gloves. Prior to  the Mystery Egg, a large "?" mark appears on her forehead. The ruby necklace has turned into an necklace fastened on her flower-themed collar which is controlling her.

On one occasion, Manami fell victim to Lulu De Morcerf's hypnotizing jewel and went into a Character Change, causing her to spread seeds all over the park, which immediately burst into bloom, even on solid objects. People who were entangled by these flowers fell into a trance-like state. As Flower Dream, she can control the plants and the flowers she summoned to trap the Guardians, she also have ability to shoot a line of dark magic to sprout flowers on everything being hit.

Manami transformed into "Flower Dream" after Amu provoked her by telling her to stop. She used flowers and plants to trap the Guardians, but Amu managed to break free and used her upgraded powers against her. After some reasoning, she realized her wrongdoings, and with Open Heart, returned to her old self. Afterward, she forgot about what happened. 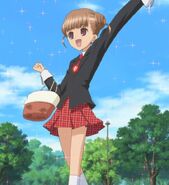 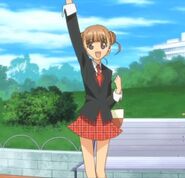 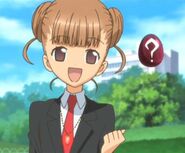 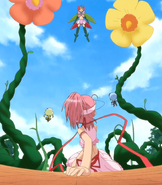 Manami fainted after turned back normal.
Add a photo to this gallery

Retrieved from "https://shugochara.fandom.com/wiki/Manami?oldid=33442"
Community content is available under CC-BY-SA unless otherwise noted.