Nagihiko Fujisaki (藤咲なぎひこ, Fujisaki Nagihiko) is a character in the manga and anime series Shugo Chara!, the male alter ego of Nadeshiko Fujisaki, (藤咲なでしこ, Fujisaki Nadeshiko) and one of the main protagonists of the story.

He has amber eyes, and long flowing indigo hair.

As Nagihiko, he lets his hair loose. He wears the blue Royal Cape and the Seiyo Academy boy's uniform. He has also been seen wearing sportswear.

As Nadeshiko, her hair is tied up in a ponytail with a red ribbon that has sakura flowers. Compared to other girls, Nadeshiko is extremely tall for her age. She's been seen wearing traditional kimonos while practicing Japanese dance. Nadeshiko is often noticed for her beauty where Amu Hinamori has even said that Nadeshiko was so beautiful that if she were a guy, she would fall in love with her on first sight. As the Queen's chair, she wears the red royal cape, skirt and brown high boots.

Nagihiko is a calm and cool-headed person who usually forms the plans for dealing with X Eggs and ? Transformations. He hates when people (especially boys) tease him for having to act like a girl, and will punish people for doing so. He is kind and understanding by nature and he has been a big help assisting Amu Hinamori with emotional difficulties.

Nadeshiko is a elegant, polite, yet fierce and stubborn girl whenever she is not getting her way.

Nadeshiko was the former Queen's Chair of the Guardians. When Amu Hinamori rejected the offer to join the Guardians, Nadeshiko insisted on getting her to change her mind. The two eventually became best friends and Nadeshiko looked over and supports Amu in her love life. When Amu went to Nadeshiko's house for a sleepover, she also stated that Nadeshiko was really pretty, and that she could dance really well. Nadeshiko eventually left to dance in Europe.

In Episode 25, Nadeshiko is revealed to be a boy named Nagihiko. It is a tradition in the Fujisaki family for the males to be raised as females as part of their training so that they may play female roles in Japanese dances.

In Chapter 8, it is revealed that Nadeshiko has even skipped gym and swimming class, so that her secret is protected.

Nagihiko reveals himself as Nadeshiko's "twin brother" to Amu. He never tells Amu the truth about him and "his twin sister" in the anime, unlike in the manga.

The only people who know his secret (besides his family) are:

After Kairi Sanjo left, he returns in Episode 56. As Nagihiko, he is appointed as the new Jack's Chair.

In Chapter 4 of Shugo Chara Encore, with some encouragement from Rima, he hurriedly whispers to Amu that he is Nadeshiko at Yuu Nikaidou and Yukari Sanjo's wedding, which shocks Amu while she catches the bouquet that Yukari threw.

Basketball/Other Sports: Nagihiko also likes to play basketball and other sports. He has been seen playing basketball as a young child, and is an extremely high jumper and good shooter. As a young child, he played basketball with others, but only once. Due to his alternate identity, he was forced to conceal his basketball skills, and to jump only as high as an average girl. If he played to his fullest potential, people might get suspicious.

Cooking: Nadeshiko is an extremely talented cook (much better than Amu, even better than Saaya's professional chefs), which may be a skill he was taught to acquire to be seen as more feminine.

Fashion: Although fashion technically isn't something Nagihiko has much interest in, it is worth mentioning that he has an eccentric fashion sense compared to other boys. This may be just another thing influenced by him spending a good deal of his life acting like a girl.

Nadeshiko's first Guardian Character is the elegant, yet fierce-tempered Temari. Prior to Nadeshiko's return from Europe, she went back to her egg to slumber for a long period of time. During the final confrontation against Easter, her owner is reminded of all the problems of being a girl and his passion for dancing. When he is able to rekindle his love for dancing, Temari is finally able to reawaken from her sleep.

During Episode 109, Amu sees a poster on a bulletin board. It said that Nadeshiko was going to perform in Japan. At this time, poor Nagihiko happens to pass by. After Amu begs him to let her see Nadeshiko, he takes Amu and Rima to the location of Nadeshiko's performance, then hurries into the changing rooms to change into Nadeshiko. Temari takes Rhythm's place. Rima makes Nagihiko become Nadeshiko, then return to Nagihiko countless times. Rhythm and Temari had to switch with him as well.

While Nagihiko was in Europe, he lost the confidence to dance as a girl and Temari was forced back into her egg. At the same time, Rhythm's egg was born, which he later brings with him back to Japan. When Nagihiko remembers how much he loves basketball, the egg hatches into the cool and outgoing Rhythm. Although Rhythm makes Nagihiko do some embarrassing things, Nagihiko still loves him.

In Episode 92, Rhythm forces Nagihiko to Character Change, and makes Nagihiko participate in a number of sports, such as soccer, volleyball, and tennis. Due to the Character Change, Nagihiko is good at every one of them, and all the sports teams want him on their team. Later, he is seen hiding from the sports teams with Amu. Rhythm Character Changes with him and makes him shout, "I'll join the team of whoever can catch me before I exit the school building!" Rhythm then makes him pick up Amu and jump out the nearby window.

When Nadeshiko undergoes a Character Change with Temari, she has cherry blossom-shaped hairclips in her ribbon and becomes more aggressive, more competitive, speaks in Hiroshima slang, and attacks with a naginata. This Character Change can activate by itself when something goes wrong in Nadeshik's house or stage. It can also activate itself when Nadeshiko is in, or watching any sort of competition.

In the anime, when Nagihiko Character Changes with Rhythm, he gets blue headphones around his neck and becomes more sporty and outgoing, but it also makes him fall in way over his head - in other words, he's rash and impulsive. He can also be quite the flirt.

This Character Change causes Nagihiko to have the desire to play all kinds of sports. The best example of this is in Episode 92, when he is late to the tea party at the Royal Garden because he had been playing sports and had lost track of time. Nagihiko decides not to trigger this Character Change again. However, Rhythm makes him character change against his will several times. He can be seen arguing with Rhythm a lot after these forced Character Changes.

When Nagihiko Character Transforms with Rhythm, he becomes an outgoing and athletic character called "Beat Jumper," a character who is capable of sports, including basketball. This represents his love for basketball at his own pace.

Appearance: As Beat Jumper, Nagihiko wears a blue vest over two shirts: one white and short sleeved, one purple and long sleeved. He wears a beanie with two small blue wings on his head, and blue finger-less gloves. He also sports black headphones around his neck. He wears blue cargo pants, knee pads, and black knee-high shoes with blue wings on them.

Abilities: His special attack is "Beat Dunk." In the manga, he only utilizes it with a basketball to shoot a hoop, while in the anime, he can use a basketball or create an energy ball for the attack, which expands the power.

Another attack, revealed in Episode 93, is "Blaze Shoot." He forms a blue energy ball to throw, which becomes a frisbee-like shape as it flies through the air and slices through a chain of X-Eggs.

The wings attached to his boots allow him to jump to an incredible height.

When Nagihiko Character Transforms with Temari, Nagihiko becomes a graceful dancer called "Yamato Maihime." This represents his love for Japanese dance and his feminine side.

Appearance: As Yamato Maihime, Nagihiko wears a long kimono with a white and purple gradient. The purple obi of his kimono extends and looks like ribbons. Pink glittery wings seem like they extend from the back of the kimono. His hair is held up in a ponytail with pink flowers.

Abilities: Yamato Maihime can perform a combined attack with Clown Drop called "Queen's Waltz." In the anime, she gets two solo attacks, "Robe of Feathers" and "Dance of the Cherry Blossoms."

By Episode 99, Rima learns about Nadeshiko's as Clown Drop and works with him as Yamato Mai, performing Queen's Waltz. She blushes when she meets Nadeshiko. In the manga, Rima compliments Nadeshiko's personality after their battle, bringing a smile to Nagihiko's face.

Nagihiko is protective of Rima in battle, saving her from X-Eggs in the anime.

In Chapter 42, Yaya noted that their mood together was similar to Tadase and Amu's.

In Shugo Chara! Party! Episode 7, Rima asks Nagihiko to treat her to a parfait.In Shugo Chara! Encore!, Rima says again that she gets along with Nadeshiko better than she does with Nagihiko. When Nagihiko changes into Nadeshiko, Rima immediately embraces her. Nadeshiko calls Rima cute a couple times. After Nadeshiko changes back into Nagihiko, Rima opens up to him about her parents and he replies with comforting words. He then tells Rima that she can cry if she wants. Later, she says to him, "...I said it before but, I'm not going to cry." Nagihiko looks at her, wipes away a tear on her face, then caresses her cheek and says, "That's right, because it's not tears that suit you..." and Kusukusu finishes, "It's a smile!" Nagihiko and Rima then share a smile together. Nagihiko tells his mother later that he has found the flower beginning to bloom.

By Chapter 4 of Shugo Chara! Encore!, Rima was acting friendlier towards Nagihiko, even patting his head. Nagihiko admitted that it made him happy since it was Rima patting his head, and Rhythm said that he was getting manipulated.

In the last few pages of Chapter 4, Rima was the one who encouraged Nagihiko to tell Amu that he was actually Nadeshiko by telling him, "Good luck!"

As Nagihiko, he takes Amu to the temple of love and calls her his girlfriend. In Episodes 56 and 62, he can't resist Amu's "sparkle attack". In the anime, there appears to be fan girls over Amu and Nagihiko supposedly being a couple.

In Episode 69, he protects Rima from First Love Dream attack, makes him begin to confess to Amu, "I'm actually Nade-", but Tadase shuts up him before he finishes his sentence.

In Episode 92, he Character Changes with Rhythm and exits the building holding Amu bridal style.

As Nagihiko, he remains friends with Amu as Nadeshiko's "twin," but keeps his identity a secret. In the anime, Nagihiko has not told Amu about his secret about him being Nadeshiko, while in the manga, he does at the ending of Shugo Chara! Encore.

(From left to right) Nagihiko (as Nadeshiko), Amu and Tadase 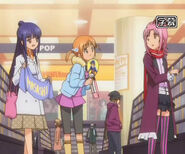 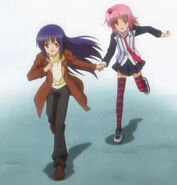 Naghiko and Rima (in manga) 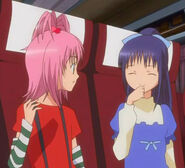 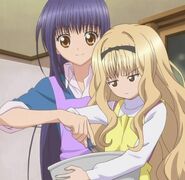 Nagihiko teaching Rima how to bake

Nagihiko acting as Nadeshiko for Amu

Her sparkle attack seems to work.

Nadeshiko as a young child.

Nagihiko and Nadeshiko in manga

Nagihko 'pretending' to be Nadeshiko