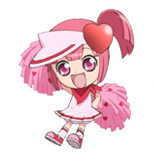 Ran wears a pink cheerleading dress in combination with a red visor. Her pink hair is tied into a side ponytail with a red heart-shaped hair clip. Over her cheerleading outfit, Ran wears a red bandana. She appears to be wearing round, puffy-type shorts under her skirt. She wears pink trainers and pink with red outlining on the top socks. She has pink eyes. She tends to carry her cheerleading pom-poms with hearts on them everywhere, even when sleeping in her egg, and is rarely seen without them.

Ran is almost always cheerful and encouraging and rarely depressed, but since she doesn't have many abilities beyond her athletic skills, she is mostly seen cheering for her friends instead of helping. She sometimes uses random english like "yay!", and "go for it" when she cheers. She is also honest, as seen in her first character change with Amu. A very energetic and peppy character, she cannot seem to stay still for a long time. The Shugo Chara! Encyclopedia! describes Ran as "super athletic and full of spirit."

Ran's egg is red and pink plaid with a black stripe in the middle of the egg. Inside the stripe there are multiple light pink hearts.

Ran's Character Change changes Amu's cross-shaped hairclip into that of a red heart and her athletic abilities are increased to superhuman levels as seen with her jumping extremely high in the air.

Amu also becomes energetic and more honest (Ran's first character change made her confess her love to Tadase Hotori) and tends to act more outgoing. However, the most used ability is the wings that can be generated on her ankles and wrists to make her fly.

In Chapter 38 of the manga and episode 100 of the anime, Amu opens her heart to Ikuto and activates the powers of the Humpty Lock and Dumpty Key, allowing Ran, Miki, Su and Dia to character transform with her to turn into Amulet Fortune.

Ran's name have two different meanings, either "lily" or "orchid".

The second reference is that Ran's name is a past tense for the English word "run". 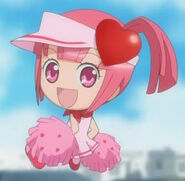 Ran looking at Kiseki's photo
Add a photo to this gallery

Retrieved from "https://shugochara.fandom.com/wiki/Ran?oldid=33405"
Community content is available under CC-BY-SA unless otherwise noted.