Based on Peach-Pit's award winning manga series of the same name, the animated series is produced by Satelight under the direction of Kenji Yasuda. Each episode of the first season begins with a quote in English:

"All kids holds an egg in their souls the egg of our hearts, our would-be selves, yet unseen."

The plot of the episodes follows Amu Hinamori whose "cool and spicy" exterior belies her introverted personality. When Amu wishes for the courage to be reborn as her "would-be self", she is surprised to find three colorful eggs the next morning, which give birth to three Guardian Characters: Ran, Miki, and Su. 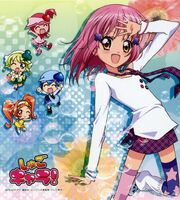 The first episode, "Shugo Chara Born!" (しゅごキャラ誕生!, Shugo Kyara Tanjō!), was first broadcast on TV Tokyo in Japan on October 6, 2007 and concluded on September 27, 2008 with the fifty-first episode, "I'll Get the Embryo!" (エンブリオをこの手に!, Enburio o Kono Te ni!). The episodes were rebroadcast by TV Aichi, TV Hokkaido, TV Osaka, TV Setouchi, and TVQ Kyushu Broadcasting within a few days of the initial broadcast on TV Tokyo. During the week of April 7 to April 13, 2008, "The Fourth Guardian Egg!" (四つ目のしゅごたま!, Yottsume no Shugo Tama!) became one of the 10 most watched anime episodes when it received an average household viewership rating of 4.2%. It later returned to the top 10 during the week of July 21–27, 2008, when its July 26 broadcast received an average rating of 4.1%. A second series, Shugo Chara!! Doki— (しゅごキャラ!!どきっ, Shugo Chara!! Doki—) immediately followed the first series. 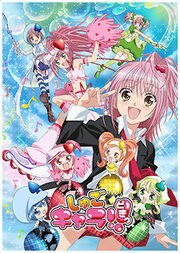 The first episode, "Sparkle With All Your Might!" (めいっぱいのキラキラ!, Meippai no Kirakira!), was first broadcast on TV Tokyo in Japan on October 4, 2008, where the series continues to air today. The episodes are also rebroadcast by TV Aichi, TV Hokkaido, TV Osaka, TV Setouchi, and TVQ Kyushu Broadcasting within a few days of the initial broadcast on TV Tokyo.

Four pieces of theme music are used for each episode. "Everyone's Egg" (みんなのたまご, Minna no Tamago) by Shugo Chara Egg! is the opening theme. "Lotta Love Lotta Love" (ロッタラ ロッタラ, Rottara Rottara) by the J-pop group Buono! is the ending theme. The second opening, starting with episode sixty-five, becomes "Guardian Guardian!" (しゅごしゅご!, Shugo Shugo!?) also by Shugo Chara Egg!. The second ending theme, "This Road" (co・no・mi・chi ?), also by Buono!, started from episode 69 to 76. The third opening is "Leave it to the♪Guardians" (おまかせ♪がーデイアン ,Omakase♪Guardians?), by Guardians4. The third ending, "MY BOY" by Buono! started showing from episode 77 onwards. Beginning with episode ninety, the opening theme is "School Days" by Guardians4, and the ending theme is "Take it Easy" performed by Buono!. 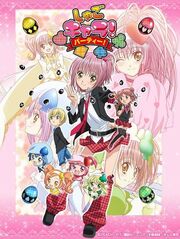 The 103rd issue of Tora Dayo, the free news handout from the Toranoana bookstore chain, displays the cover from the October issue of Kodansha's Nakayoshi magazine with an announcement of a new Shugo Chara! anime program. According to the Nakayoshi cover image in Tora Dayo, Shugo Chara Party! will premiere in Japan on Saturday, October 3.

During Episode 104 (EP002) of the Shugo Chara! Party!, an additional short program was added. Check below: