Su (スゥ, Suu) is Amu Hinamori's third Guardian Character. She represents Amu's desire to be more caring and improve her domestic skills. Her fellow Guardian Characters are: Ran, Miki, and Dia. Her name coincidentally is the same as the second syllable of "desu", which she says after most of her sentences.

Su's outfit resembles a waitress or a housemaid, with a typical white apron and a frilly, green dress under it with green shoes with laces that cross to create an "x". She has emerald green eyes. Her light green hair (though mainly appears to be blond sometimes) is short (or  possibly tucked into her hat) in the back and grows longer in the front, where it ends in delicate curls. On her hat, a clover symbol is attached. Once in Shugo Chara! Pucchi Puchi!, Su lost her Clover, so her, Ran, Dia and Miki looked for it. Luckily, Kusukusu and Pepe found it.

Su is very gentle, orderly, girly and laid back, with a motherly attitude towards people who need care. But she can also be quite clumsy and ditsy at times. She is one with the most interaction with Yuu Nikaidou after helping him clean his room. She has fear of insects like caterpillars, though she can get scared of anything relatively easily. Sometimes she can be over the top during cleaning jobs, ordering others around to help out. However most of time she is extremely polite, to the point that she refers to the Embryo as 'Embryo-san'. The Shugo Chara Encyclopedia describes Su as an "excellent cook", but "a spontaneous girl with her head in the clouds".

Amu becomes Amulet Clover (アミュレットクロバー) when she Character Transforms with Su to use her cooking abilities and represents her desire to be more domestic and a sweethearted character.

Appearance:
In the image of a maid/housekeeper, Amu wears a maid outfit, consisting of a large, green balloon dress she wears in combination with an apron.

A lot of bows are seen in this Character Transformation. She also wears light green gloves and the same kind of headdress Su wears. She's also given ponytails that go behind her maid's headdress. The Humpty Lock shines with green light. Amu first becomes "Amulet Clover" in Episode 10 of the anime and Chapter 13 of the manga.

Abilities:
Since Amulet Clover's powers are domestic, she is mostly useful in defense and regeneration. She can also use this character's power to create food.

Amulet Clover can use a whisk for the attack "Remake Honey" to restore broken objects and purify X-Eggs. Later, they can also use an attack called "Remake Honey Special". On one occasion, she uses a harmless technique called "Sweet Applique" to generate flowers and ribbons on Kairi's weapon. She is also able to generate a pan for defense.

In the second season, "Amulet Clover" utilizes a bubble wand . She uses it for "Honey Bubbles" which sends out a storm of bubbles to push off a horde of people and to clear off enemies' attacks. She later uses a bowl to absorb her opponent's attack and pepper to make her opponent sneeze.

In Chapter 38 of the manga and episode 100 of the anime, Amu opens her heart to Ikuto and activates the powers of the Humpty Lock and Dumpty Key, allowing Ran, Miki, Su and Dia to character transform with her to turn into Amulet Fortune.

Su's name was simply translated as "silk" in Japanese.

The second reference is that Su's name is coincidentally identical as "desu". 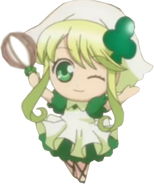 Su and her wisk (from episode 3)

A Cute Su while feeding Sensei a Minty gum

A fight among the three.

Su, Miki, and Ran make a mistake for using again the Doki sign !

Amulet Clover's Pan (from another angle) 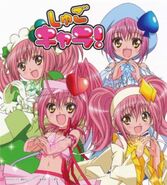 Su
Add a photo to this gallery

Retrieved from "https://shugochara.fandom.com/wiki/Su?oldid=33419"
Community content is available under CC-BY-SA unless otherwise noted.