Tadase Hotori (辺里唯世 Hotori Tadase) is one of the main characters of Shugo Chara!. He is the leader of the Guardians, also known as the "King's Chair". He is in the same year as Amu Hinamori, and is another main character of the series. His dream is to be the king of his small world. Kiseki was born by Tadase's dream to have a strong-willed heart, much like his grandmother when she was still healthy. He only wants to protect the ones he loves.

Tadase has short blond hair with a thin ahoge. He has two bunches of hair at the side of his face and one single strand of hair that seems to protrude a bit. He has big, red-violet, almost mahogany-colored eyes. Tadase's cute form and face constantly attract girls and confessions to him. For example, Amu confessed to him in the first episode of Shugo Chara!, but he said there was already someone he liked. However, Tadase was only referring to his dead dog, Betty.

Tadase is timid and educated, even though he acts confident around others. Tadase is very kind as Kiseki points out that kindness is his strength before they Character Transform into Platinum Royale for the first time. The Shugo Chara! Encyclopedia! describes Tadase as a boy who is "kind and slightly shy", it also comments he's "totally popular with the girls". An example of this is that he has a fan club, the Tadase Fan Club, comprised of five members, the leader being Saaya Yamabuki, who is in love with Tadase. At first throughout the series we see that he often stays very calm in many situations, but as we progress, we see more of the inside character that is Tadase and he is actually very expressive of his emotions.

Tadase's Guardian Character is Kiseki, who was born from his desire to become stronger and the dream of world domination. Also, Kiseki acts as if he is the leader amongst all the Guardian Characters. It's a running gag for the other Guardian Characters to ignore him. Kiseki has light purple hair and blue eyes. He has been described as "a mini-Tadase" by Amu. He wears a king's outfit with puffy dark blue pants with white stripes, and a long red cape with a yellow crown. His outfit is that of traditional fairy-tale styled "kingly" attire, perhaps in reference to both Tsukasa's love of them, and the fact that, according to a book featured within episode 44, the location of the Embryo is hinted at via said stories.

Whenever someone says the word "prince" ("ouji" in Japanese) or "dead end" (It is somewhat similar to "ouji") in his presence, he will immediately Character Change into a confident and egotistical king who seeks to dominate the world. This provoked Character Change doesn't last long. However, it can be stopped when someone puts a bucket over his head. During Character Change, he receives a crown and a golden staff that enables him to use a technique called "Holy Crown", to protect him and others from danger, as well as trap his opponents.

With the help of the Humpty Lock and Amu's encouragement, Tadase can merge with Kiseki and Character Transform into "Platinum Royale".This represents his desire to be more confident and to be a strong king.

*Mizue Hotori: Tadase's mother in the manga. Because Tadase's father had a close relationship with Ikuto's mother, she is jealous of Souko Hoshina, and expresses that hatred to her children in the anime.

Tadase talking to Amu during his confession 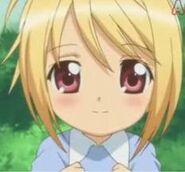 Tadase when he was young 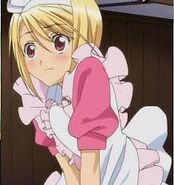 Tadase being forced to crossdress 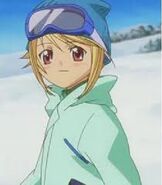 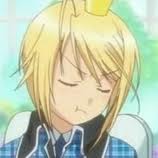